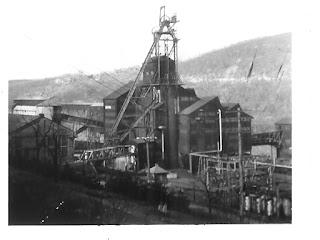 Like i said in Mr.Snopik's post..we love hearing from blog readers who have photos/stories and memories to share.Thats why we do this and its catching on!Former area resident Patricia Ogden sent me some amazing photos from Nemacolin in the 1940's.She not only earned her own post,but series of posts! I will also include Patricia's descriptions which she emailed me.We cannot thank her enough! If you enjoy these posts,please comment!! So,Patricia...here we go!!
To see the mine in its current state, click here for the first of four videos. 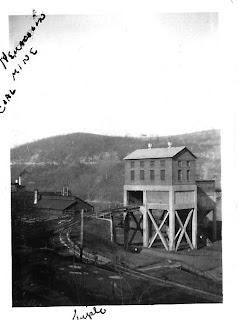 Attached are photos that I found in my mom's album of Nemacolin mine. Most of these were taken in 1940, 70 years ago! Some of them were very small, only 2" x3". I have adjusted the contrast to make them as visible as possible, but this is the best I could do, considering the age and size of the photos. I viewed Judge Toothman's YouTube videos a few years ago and seem to remember that he said he worked at the mine for a time. Perhaps he can help expand on the uses of these buildings. These photos were left to me by my deceased mother, you have my permission to use them on your website, Southwest Pennsylvania Rural Exploration.

-I am going to send several separate e-mails, with a few photos attached.

-I have labled the photos with what was written on them by my mother. I certainly remember seeing the mine buildings, but I don't know what they were used for. 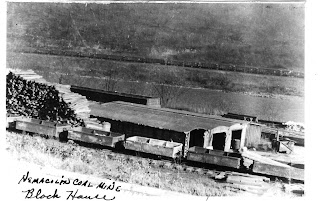 -The block house stood in what we called the supply yard. There were timbers, cinder blocks, etc. stacked here for use in the mine. In the foreground of the photo, you can see the brick road, then the small cars of a utility "train" that was used to transport the supplies to the mine shaft. There are a few timbers loaded in the last car. I don't know the use of the block house. But, notice across the river there is a train pulling coal cars. In this photo, the mine would be up the hill to the left, the ferry landing would be down the hill to the right. The place where the brick road ended at the dirt is just past this point, to the right. This block house was directly across the street from my family's home. 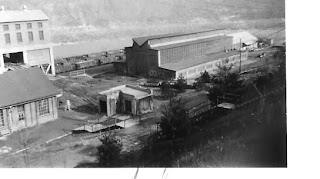 -Mine entrance photo-the steps you showed in your video continued across the brick road and down the hill to the mine. These steps can be seen in this photo, on the right. The machine shop building, that you walked thru in your video is shown in this photo. I remember in the 1960s that many of the windows in the shop building were blue, perhaps to reduce the heat in the summer? Also in this photo behind the machine shop building can be seen coal cars waiting to be loaded at the tiple.
(Keep in mind..the pics may not post in order as described,but I'll try - Chip)

Posted by chippertheripper at 1:25 PM