A visit to the former Pittsburgh International Dragway! 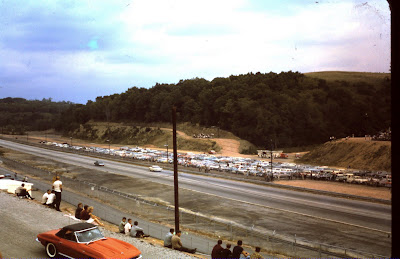 The above photos courtesy of Abandoned & Little Known Airfields. Visit their site for more information: 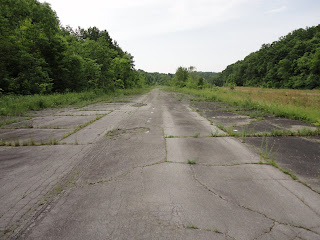 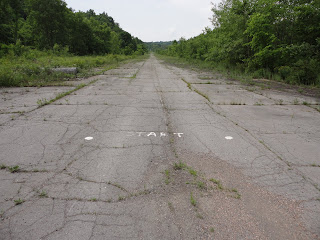 We look at our stats pretty often to see what you folks like and view the most.  The Pittsburgh International Dragway is always near the top of the list.  Evan, Danielle, Remy and I headed out today to find the former dragstrip that served Pittsburgh and surrounding areas from 1964 to 1976.
Using Google maps and Evan's GPS, we found the road leading to the track pretty quickly, but thats where the "quick" stopped!  We were greeted by a locked gate and were unsure if this was the spot.
Fortunatley,for us, a gentleman was in his yard at the end of the lane near the gate and confirmed that this was indeed the spot.  He told us he remembers when the track was active and cars lined the road all the way to the track on the weekends.  He went on to say the gate was locked mainly due to ATV traffic and people sneaking up to race.  He was very nice and gave us the o.k. to head up for pictures (Whew!) "You can go up,but it's a ways!" Um...yea.
We walked....and walked...and walked.  When the man offered to find the key, we should have waited! What we estimated was about two miles, past old mining equipment and a slate dump (made us feel at home!) we crested the hill and there she was!
In the video, we begin to doubt if this was the track.  We were using a former airstrip as our guide.(see map on original post) and were confused to the location of the buildings at the end of the track.  Well as it turns out,the airstrip is right above the dragstrip(a fellow at the business confirmed this) but the "hilltop" strip wasn't the race track.  The one in the pics/video is the dragstrip.  So we were right...by accident!
This post will evolve with more pictures and video in the next few days,so stop back.be sure to check out the recently updated:
http://www.pittsburghinternationaldragway.com/
There are many great photos and info there!! So,  Happy late father's day,Dad! We found the track ( I got a chunk of asphalt for him!)
---------------------------------------------------------------------------------------

Posted by chippertheripper at 12:12 AM 10 comments: 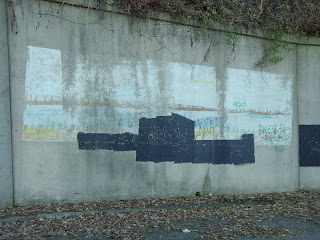 Those of us old farts who remember the 1976 Bicentennial celebrations that took place around the nation remember what an awesome time it was to be a kid.Rice's Landing,Pa was no different.Your biggest concerns were bicycles,baseball and going to Journic's store for penny candy and a bottle of pop.
That summer,the town held a week long celebration of our country's 200th birthday.It was the begining of what became the annual "Riverfest".Unlike the weekend long party on the lockwall,this celebration was a town-wide party.There were hog roasts in the park,chicken roasts at the athletic club and a "almost anything goes" (based on a popular tv show at the time)obsticale course at the baseball feild across from the American Legion.There were flea markets,skateboard races and all kinds of food and music on the lockwall.It was awesome.I plan a bigger blog with tons of pictures on this soon,but today's focus is on the mural.


Painted by Rice's Landing resident Clarence Rager.The mural was painted on the retaining wall going down the hill toward the river.It is/was a picture of an eagle perched on a branch with the Monongahela River in the background.It was cool because it remained after the celebration ended,something the town could keep.
As you can imagine,time and spray paint has taken its toll on the mural.It still exists,but needs help.Evan,Danielle and I personally volunteer to kick off the restoration.We're seeking out high quality pictures of the mural when new.I'm going to speak to the council and get permission to restore the mural.I think the people or Rice's Landing would like to see it come back...Let us know what you think and if you would want to help.Look for more updates here and on the facebook page!
Posted by chippertheripper at 11:55 AM 1 comment: