So,really...where is the Crucible Ferry? 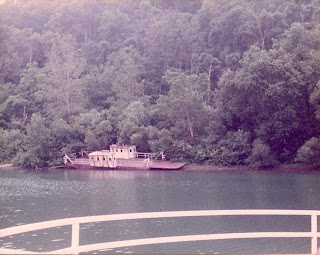 If you've been following the blog for any ammount of time or have watched any of our videos,you have heard me ponder the location of the Nekoda,the cable ferry that ran between Greene and Fayette counties near Crucible Pa.In the last few months I've been told that it was removed from the river for restoration/display in a nearby museum (which I hope is the case).I've heard it was cut up for scrap.I've been told by several folks its still resting in the Monongahela,just south of the former Crucible Mine peirs.
The problem is...the people who have shared these theories are all people I trust and would have insight,rather than just random opinion or speculation of Joe Blow.So,here is my plea...
If the ferry was removed for display,where is it now? I would imagine if someone went to the trouble to rescue it,they wouldn't mind some free publictiy! we would LOVE to see it and follow its restoration/display.
As far as the scrap theory,why would someone go to the expense of removing the sunken ferry for what would be a few hunderd dollars worth of scrap iron?I hope this is not the case but if it is..does anyone know for sure?
The two fellows who told me it is still in the river are two men who would/should know.One is Dave Waters,whose father operated the ferry for many years.Dave states he has many photos/news clippings of the ferry which we will go see soon.The other is a retired Coast Guard member,who lives on the former ferry landing on the Fayette County side.He states the ferry is marked by the red bouy just south of the mine.
The photos earlier in the blog are from 1982.It sat just of the ramp.In the flood of 1985 it was washed just north of there,near the mine.My father says that the navigation equipment on any towboat on the river would see the ferry plain as day if it still lay in the river,so mabye we should ask a riverboat pilot?
Well,the authority on the ferry should be its owner.Margaret Mitchell.Ms.Mitchell operated the ferry for many,many years.She is (I believe)living in a nursing home in Waynesburg,Pa.Evan and I plan to visit her and,if possible, get her side of the story as well as any other history we can.We'll keep you posted.But in the mean time...if you know,for sure,the location of the ferry (or whats left) PLEASE email us.The person with the right answer wins a Stan-Lees hoagie!!
Posted by chippertheripper at 12:55 AM